As we all know, an explosion is never limited to a single element. Even when all reasonable measures are taken, such as the installation of explosion relief panels, an explosion can spread to other equipment through inlet ductwork. Stuvex has just launched the NOVEX Filter Isolation Valve which, when installed close to the inlet of a filter, will protect all upstream equipment in the event of an explosion.

The NOVEX valve is an explosion-proof flap valve which, under normal circumstances, has no effect on the process system. the valve flap is held open by two magnets but if, during the process, an explosion occurs behind the valve, the airflow is immediately reversed by the rise in pressure. When this happens the reversed airflow immediately releases the flap thereby isolating the upstream system from the explosion. The flap remains locked in the closed position until it is manually unlocked for inspection after the explosion.

The NOVEX valve can handle organic and metal dusts up to ST-3 KSt max 440 bar.m/s

NOVEX is easy to maintain thanks to a hinged inspection hatch at the top of the valve and is certified to Directive 94/9/EC and according to EN16447: 2014. For more information please contact Steve Bell on 01932 571303. 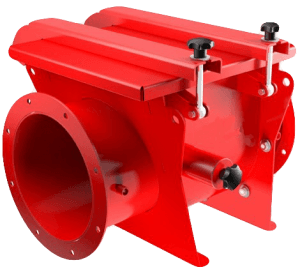